Mazie K. Hirono was elected to the Senate in 2012 and sworn in as Hawaii’s first female senator and the country’s first Asian-American woman senator. Throughout her time in the Senate, Hirono has fought on behalf of Hawaii families and communities whose voices are not often heard in Congress.

Born in Fukushima, Japan, Hirono was nearly eight years old when her mother brought her and her siblings to Hawaii to escape an abusive husband and seek a better life. Hirono served in the Hawaii House of Representatives from 1981 to 1994 and earned a reputation as an advocate for consumers and workers. After being elected as Hawaii’s lieutenant governor in 1994, Hirono led efforts to support Hawaii’s tourism industry through visa reform. Voters in Hawaii’s second congressional district elected Hirono to serve in the U.S. House of Representatives in 2006. 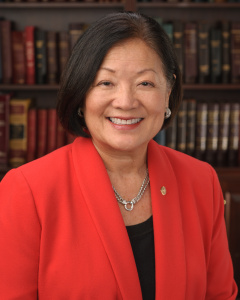