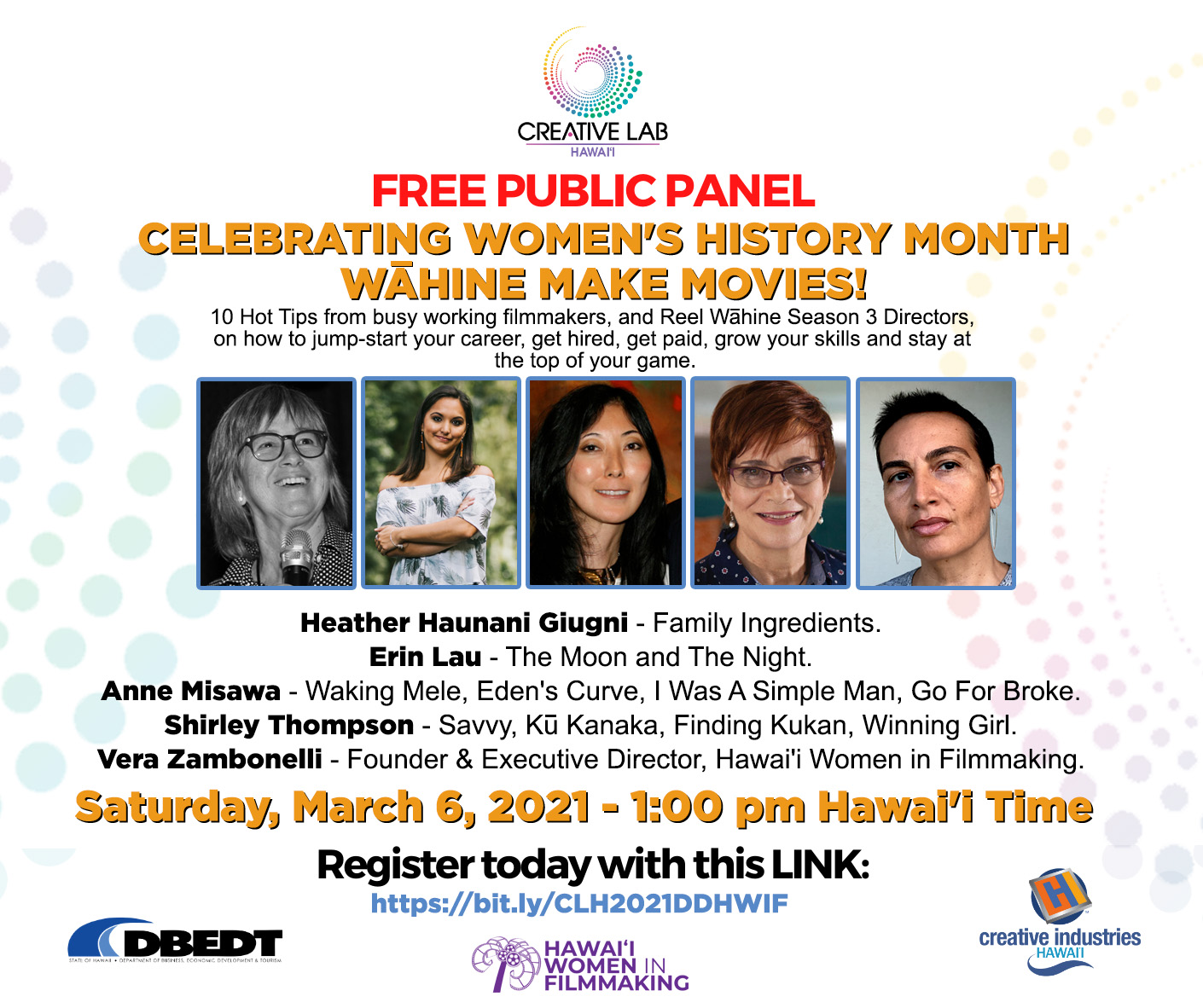 Join us for the free, one-hour Zoom webinar, as we discuss Wāhine Make Movies!

10 Hot Tips from busy working filmmakers on how to jumpstart your career, get hired, get paid, grow your skills and stay at the top of your game. Featuring Heather Haunani Giugni, Erin Lau, Shirley Thompson, Anne Misawa, and Vera Zambonelli – the 5 directors and producers of the 2021 REEL WĀHINE OF HAWAIʻI filmmaking team. A fast-paced discussion of best-practices and practical advice for working in the film business from five creative and successful women who have survived and thrived in the industry. Bring your questions!

Anne Misawa  has worked internationally in various aspects of film production. Her primary work is as a Producer, Director and as a Cinematographer. Credits include WAKING MELE, (Director, 2000), EDEN’S CURVE, (Director, 2003), I WAS A SIMPLE MAN, (Co-producer, 2021), GO FOR BROKE, (Producer, 2017), STORY GAME, (cinematographer, 2020), and MARGARITA, WITH A STRAW (cinematographer, 2012). Anne is currently an Associate Professor at the Academy for Creative Media, University of Hawaiʻi at Mānoa where she teaches cinematic production.

Native Hawaiian filmmaker Erin Lau is a University of Hawaiʻi Academy for Creative Media alum who completed her MFA in Directing at Chapman University. She is a Sundance Native Lab fellow for her film THE MOON AND THE NIGHT screened in numerous competitions, international film festivals, and broadcast networks. Currently, Lau works as a Producer-Director for Jubilee Media, creating digital content and videos for brands including Google, Netflix, and Always.

Heather Haunani Giugni has produced and directed numerous projects including documentaries, television series and live broadcast events. Her work has been nominated multiple times for an EMMY, winning one for her series called FAMILY INGREDIENTS. She is a founding member of Pacific Islanders in Communications and ‘Ulu’ulu, Hawai’i’s moving image archive and an adjunct faculty member at the Academy for Creative Media – UHWO.

Shirley Thompson is a veteran documentary editor, writer, producer and story consultant best known for the documentaries she edits, most recently: SAVVY (2020), KŪ KANAKA (2016), Finding KUKAN, (2016), WINNING GIRL (2014), and PIDGIN: THE VOICE OF HAWAI‘I (2008). Shirley has co-produced and edited the web docu-series CROSSING SPACES. As a Latina and a daughter of immigrants, she is committed to filmmaking that builds bridges across cultures and communities.

Independent filmmaker and researcher, Vera Zambonelli is the founder and ED of Hawaiʻi Women in Filmmaking. Her primary work is as a Producer and Director. Credits include REEL WĀHINE OF HAWAIʻI (Series producer) and director of 2 of its episodes. Her latest project, 72 HOURS, is a documentary on formerly incarcerated women’s reentry and reintegration. Vera teaches at UHM Women’s Studies and UHWO Academy for Creative Media.

Cosponsored by Hawai’i Women in Filmmaking.