People dream about what they want for Christmas, but for one Kona woman, her dream is coming true.

The short film features a handsome but lonely postman, Tom, who has a crush on Lauren, a single mom on his mail route who has never noticed him.
Bircher, a product of the state’s Creative Lab Hawaii 2017 Writers Immersive Program, has also optioned her “Victorian Christmas” script to a major production company.

“Christmas movies are so much fun to write. There are so many aspects to Christmas. You can throw a simple story into Christmas and make a movie out of it,” Bircher told the Tribune-Herald.

The “Victorian Christmas” screenplay earned Bircher her coveted fellowship in the program, which is part of the Department of Business, Economic Development and Tourism’s Creative Industries Division. The program offers writers a track to develop new content for motion pictures and television, while learning how to navigate the business.

It was a mentor in the program who introduced Bircher to a producer who, after seeing a writing sample, offered her the opportunity to write “Delivering Christmas,” a work-for-hire teleplay.

“It was their idea, their story, and I got to write it. It was basically a couple of paragraphs that we started with. And we did everything by email and phone,” Bircher explained. 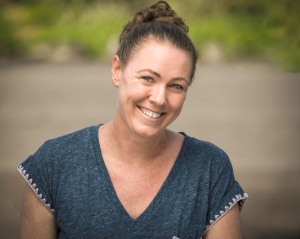 “The very first thing they did was to provide an environment I needed to become a strong writer and a strong businessperson. I had to change my life to make room for my writing,” she said. “I’m not sure I would’ve changed what I needed to without their guidance. I might not have figured that out on my own.

Georja Skinner, chief officer of Creative Industries Division and founder of Creative Lab Hawaii, said Bircher has “a zeal and a dedication that is unwavering.”

“That’s what any entrepreneur needs to succeed,” said Skinner, one of the first women audio engineers in television, whose resume includes the hit sitcoms “All in the Family” and “The Jeffersons.”

“Talk about people having a laser focus with something they want to do, we’re seeing it play out with Amy. She was so focused on studying the way things were written and wanting to improve her screenwriting. And she would not take no for an answer. She just threw her whole heart into this.”

A Hawaii Preparatory Academy graduate and voracious reader, Bircher said the idea for “Victorian Christmas” came from an unfinished attempt to write a romance novel.

“My best friend, who works in Hollywood, said to me, ‘You’re talking really visually. It sounds to me you should be writing a screenplay,’” she said. “I have no idea why I never thought of writing a screenplay. But once I switched over to that medium, everything clicked. I finished the story in about a year, and most of that year was trying to figure out how to write a screenplay in the first place.”

Despite the title, “Victorian Christmas,” which could be produced and aired by Christmas 2018, isn’t set in Dickensian England.

“It’s funny. Everyone thinks it’s a period movie, and it’s not,” Bircher said. “It’s called ‘Victorian Christmas’ because it’s set in a Victorian house in Nevada City, California. There’s a lot of Victorian architecture and that house is so historical.”

“With ‘Delivering Christmas’ soon to air, and three other projects already optioned from our current Writers Immersive cohort alone, we couldn’t be more proud of the quality of work that is being produced,” said Michael Palmieri, Creative Lab’s executive director and a writer-producer whose credits include the film “Six Days and Seven Nights” starring Harrison Ford and Anne Heche.

“My group, we’re really close,” she said. “And we’re able to give each other our scripts and give each other feedback really fast. And it’s a safe and supportive environment. And that’s something I didn’t have before.

“It’s also nice to have people like Michael and Georja who have a lot of industry knowledge and can help me with those questions, too.”

Skinner called the proliferation of cable channels, streaming services like Netflix and Internet-based entertainment programming “a new landscape in media.”

“And when you have someone like Amy, who is dedicated and has a talent for screenwriting, especially in this genre right now, then the sky’s the limit. She’s making the steps in a way that’s remarkable, and we applaud her for listening to our mentors and being fearless about making contacts.”