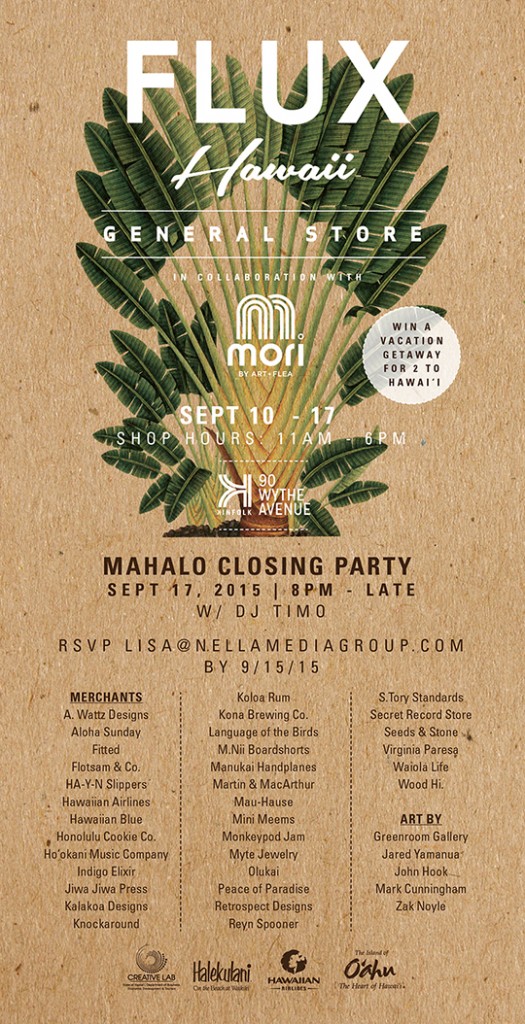 The pop-up shop, curated in collaboration with Mori by Art+Flea, will represent Hawaii’s modern and diverse culture to the global audience present in New York during Fashion Week and will offer iconic Hawaii products for sale from nearly 40 local artisans (entire list below). The shop will also feature wares from the two finalists of the State of Hawaii Department of Business, Economic Development and Tourism’s (DBEDT) Creative Lab program: AWattz Dezigns and Peace of Paradise.

“As advocates for Hawaii’s creative industries, we are excited to showcase our Creative Lab finalists and partner with Flux Hawaii during New York Fashion Week to highlight our talented entrepreneurs,” says Georja Skinner, Chief Officer, Creative Industries Division of DBEDT. “Hawaii talent across all the creative sectors is emerging into a force in the global marketplace.”

“It has always been at the heart of FLUX Hawaii to celebrate passionate individuals who find a way to create opportunity and industry in a place deemed difficult to make a living,” says Lisa Yamada, Editorial Director, Nella Media Group, and Founder, FLUX Hawaii. “From being featured within the magazine’s pages to being showcased in a pop-up shop in front of some of the world’s biggest buyers and media in New York City, it is FLUX Hawaii’s goal to create a space that fosters the growth of these innovative entrepreneurs.”

This event is made possible with support from the official sponsors of the FLUX Hawaii General Store: Hawaiian Airlines, Halekulani, Oahu Visitors Bureau (OVB), and the State of Hawaii Department of Business, Economic Development and Tourism.

“Our goal at NMG is to promote Hawaii on a much larger scale than standard content platforms,” said Jason Cutinella, CEO, Nella Media Group. “These events are designed to showcase the destination and everything it has to offer in a different light. We want to show that Hawaii is modern, exciting and full of opportunity.”

The FLUX Hawaii General Store will kick off with an opening event featuring Big Wave Tour champion and musician Makua Rothman. A lucky winner will win a getaway package for two to Hawaii on Hawaiian Airlines with a four-night stay at the internationally acclaimed Halekulani hotel. The shop will close on September 17 with a Mahalo Party with Hawaii transplant DJ Timo.