Vilsoni “Vili” Hereniko, an award-wining Pacific Islands writer-director, and his producer wife, Jeannette Paulson Hereniko, are collaborating with Australian and New Zealand producers to bring “Until the dolphin Flies,” a modest Marshall Islands story to the big screen.

The Herenikos will team up with Trish Lake of Freshwater Pictures in Brisbane, Australia, and Catherine Fitzgerald of Blueskin Films in Wellington, New Zealand, to bring author Robert Barclay’s “Melal,” on which the film is based, to a global audience.

Hereniko is a visionary educator-filmmaker, born on Rotuma, an islet north of Fiji, and his wife is a veteran producer and founding director of the Hawaii International Film Festival.

“My father was a great story teller,” he said. “The transformative power of a great story fueled my imagination as a young boy living (in Fiji) for 16 years. and from my minority culture and through my journey in academia, starting in England and now in Hawaii, the hallmark of my work is empowering native people. so I’m determined to cast Marshallese actors who live in these islands. The process is just as important as the product.”

“I think the cross-cultural relationship are a topic Vili and I are very interested in our creative life,” said Jeannette, who also will be a producer via the couple’s Te Maka Productions, for which she serves as president and producer. “The Land Has Eyes,” their earlier production, is an award-wining feature narrative that earned them a reputation in the Asia-Pacific realm.

“Dolphin” is about a man named Rujen, evicted from his pristine Tarwoj, who is forced to relocate his family to the arid Ebeye atoll because of American military missile testing. He has anger management issues and cultural challenges until he encounters a wounded dolphin that becomes a catalyst to self-discovery and rehabilitation.

Casting will begin in 2017, and filming, likely in Australia and the Marshall Islands, in 2018.

“Vili is content with finding a nonprofessional Marshallese, as he did for “The Land Has Eyes,” said Jeannette of the leading role. The indie project has been 10 years in the making and has a budget between $2.3 million and $3million, with fundraising for $600,00 more continuing through pre-production.

“It is not easy doing a feature narrative, which commonly is not a money maker, but we’re not in this to be rich,” said Vili Hereniko. “We’re very much interested in stories with social justice themes, equality, race and gender. It’s important that mainstream cultures be aware of minority cultures, but a story of a common person resonates with the fabric of American culture.”

Hereniko entered the project for a spot in Creative Lab Hawaii’s Producers Immersive Program, a track for producers in all genres to develop new content for films and TV. As a CLH participants, he was able to participate in this year’s American film Market, which allowed him to network and market the script he co-authored with Micronesia screenwriter Joseph Grogan, now of Australia.

While Hereniko prefers the simple, he was a cultural consultant for Disney’s new smash hit “Moana,” which he has seen thrice (once in 3-D) “and plans to go see it a fourth time.” … 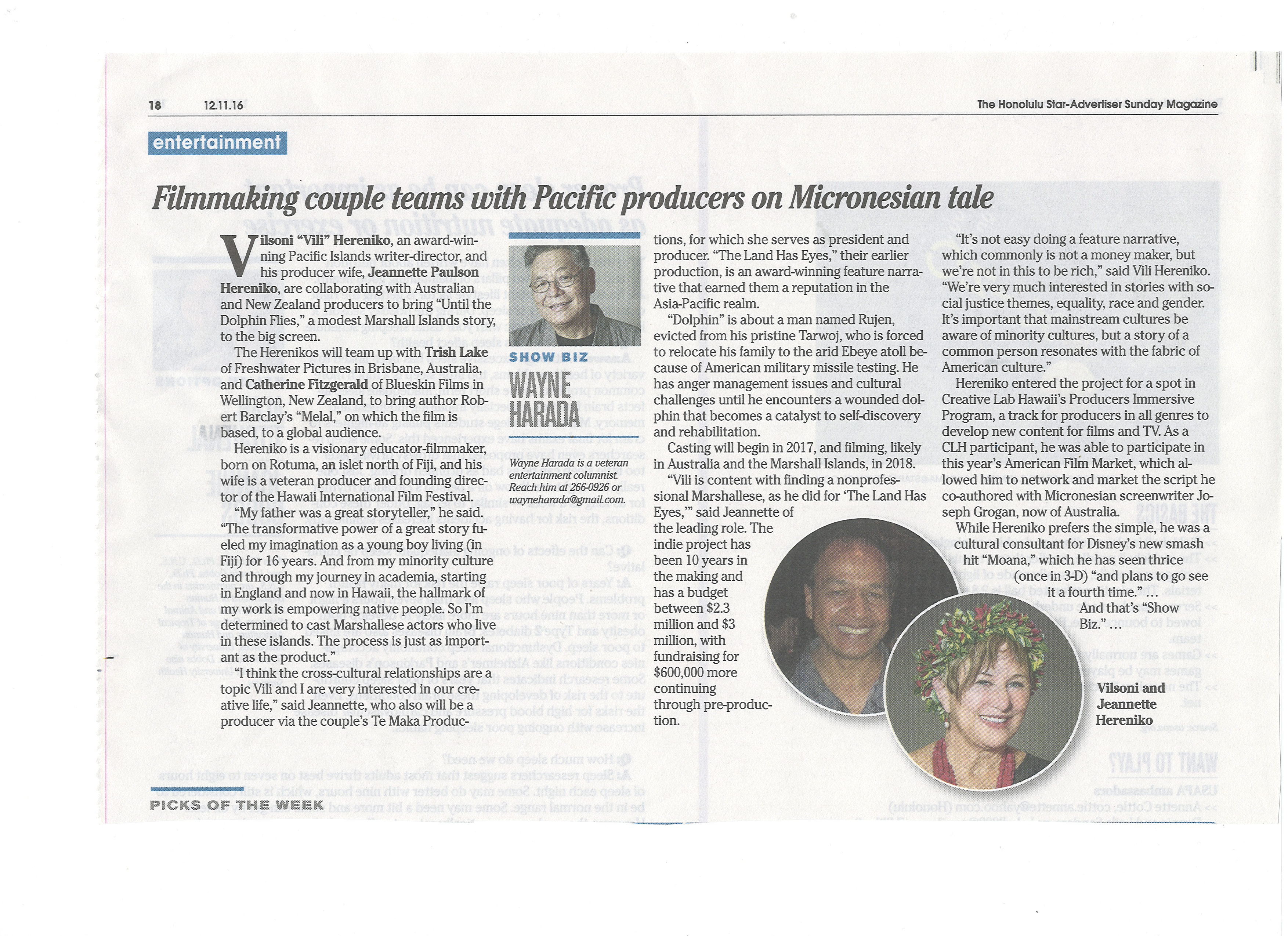 Wayne Harada is a veteran entertainment columnist. Reach him at 266-0926 or [email protected]