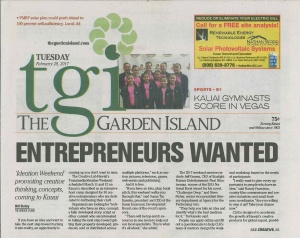 If you have an idea and want to take the next step toward turning it into reality, an opportunity is coming up you don’t want to miss.

The Creative Lab Hawaii’s Transmedia Ideation Weekend scheduled March 11 and 12 on Kauai is described as an intensive boot camp designed for 30 creative entrepreneurs who are dedicated to furthering their craft.

Organizers are looking for “individuals who have an idea, concept, a fully developed story, script or other content who are interested in taking the next step toward getting their property developed, produced, sold or distributed across multiple platforms,” such as motion pictures, television, games, web-series and publishing.

And it is free.

“If you have an idea, play, book pitch, this weekend walks you through that,” said Susan Tai Kaneko, president and CEO of the Kauai Economic Development Board, one of the event’s sponsors.

“There will be top-notch resources in one room to help out our local specialists. This is what it’s all about,” she added.

“They help you take an idea and identify what’s the best medium for it,” Tai Kaneko said.

People can apply online and fill out a questionnaire to help CLH’s team of mentors design the weekend workshop based on the needs of participants. 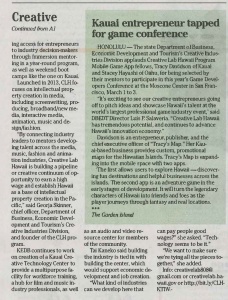 “I really want to give every opportunity to people who have an idea,” said Randy Francisco, county film commissioner and creative industries and small business coordinator. “Are you willing to step it up? Take your chance now.”

CLH is designed to accelerate the growth of Hawaii’s creative products for global export, providing access for entrepreneurs to industry decision-makers through immersion mentoring in a year-round program, as well as weekend boot camps like the one on Kauai.

“By connecting industry leaders to mentors developing talent across the media, music, fashion and animation industries, Creative Lab Hawaii is building a pipeline or creative continuum of opportunity to earn a high wage and establish Hawaii as a base of intellectual property creation in the Pacific,” said Georja Skinner, chief officer, Department of Business, Economic Development and Tourism’s Creative Industries Division, and founder of the CLH program.

KEDB continues to work on creation of a Kauai Creative Technology Center to provide a multipurpose facility for workforce training, a hub for film and music industry professionals, as well as an audio and video resource center for members of the community.

Tai Kaneko said building the industry is tied in with building the center, which would support economic development and job creation.

“What kind of industries can we develop here that can pay people good wages?” she asked. “Technology seems to be it.”

“We want to make sure we’re tying all the pieces together,” she added.